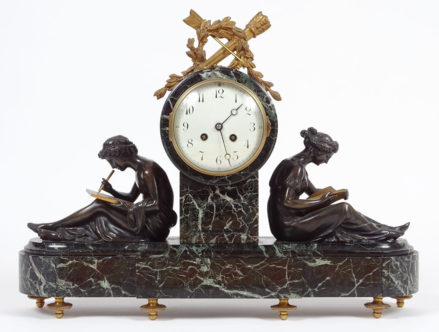 An Art-Deco style mantel clock with a large marble base supported by six engraved legs, four on the front and two on the back. Above, on a monumental column, a circular clock crowned with a quiver, arrow and laurel wreath in gilded bronze. On the sides, two seated figures in patinated bronze depicting a woman reading and a young man writing. The dial is enameled with blackened hour numerals and minute dots with quarter markings. The mechanism with beating hours and half-hours, with spring tension and adjustable pendulum, with original key for winding.
The clock is signed on the mechanism C.H. Paris number 4033 5.2. The mechanism is stamped “JUST”.
Bronze, marble, France, Paris, ca.1930.

Charles Victor Hour was one of the co-founders of the HOUR LAVIGNE company, which still produces some of the finest and most spectacular clocks today. He began working at the age of 11 as an apprentice and 20 years later bought out the failing factory. In 1891, he and his partner Diette, became one of the most important clock manufacturers in France. Hour then became associated with Maurice Lavigne, and by the end of the 19th century Hour Lavigne was the largest manufacturer of clocks and timepieces in France, with over 800 employees. In 1925, the company decided to promote a new series under the brand name “JUST”. These clocks were characterized by high prices, adjustable mechanisms and limited production.