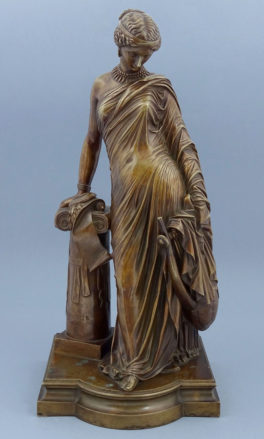 A bronze allegorical figure of the Greek poet Sappho, depicted holding a lyre and leaning against an Ionic column.
Patinated bronze, signed J. Pradier. 1848.
Below, there is a foundry crown mark with the letters v.p. – Victor Paillard.

Jean-Jacques Pradier, known as James Pradier (1790-1852) was a sculptor and painter from Geneva who made a career in France. Following the fashion of the time, he adopted the English name of “James”. He entered the public school of drawing in 1804. In 1807 he joined his brother Charles-Simon Pradier in Paris, where he worked for François-Frédéric Lemot before being admitted to his studio at the Ecole des Beaux-Arts in Paris, as well as in the painters Charles Meynier and François Gérard.

Pradier won the Grand Prix of Rome in 1813 in sculpture for his bas-relief “Néoptolème prevents Philoctète to pierce Odysseus with his arrows”. He was appointed professor of sculpture at the School of Fine Arts in Paris in 1828, where he replaced François-Frédéric Lemot. We wanted to recognize the traits of Juliette Drouet, his mistress, in the marble group “Satyr and Bacchante” who caused a scandal at the Salon of 1834. This link ended when Juliette met Prince Demidoff, she left for Victor Hugo, then Pradier’s friend. In Paris, James Pradier had in 1831, his home rue des Beaux-Arts and his studio at rue Neuve-de-l’Abbaye.